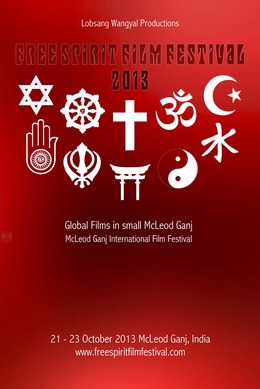 The Free Spirit Film Festival 2013 will be starting from Monday for three days, showing 19 films from countries such as Bangladesh, Egypt, France, India, Ireland, Iran, Israel, UK and the US.

This Film Festival is produced by Lobsang Wangyal Productions, which has been producing events since 2000.

We have been bombarded with film submissions from around the world this year. Therefore, "McLeod Ganj International Film Festival" certainly seems to fit.

All the film directors and their networkers have been reaching out to us to share their films in this little village of McLeod Ganj, which is yet a global spot with the presence of people from all over the world.

The winners of the film awards this year were chosen by a jury from the pool of films which are part of the festival. The Audience Award will be decided by festival-goers' ballots.

A few of the directors are coming to the Festival to present their films: Pema Dhondup from California of the film Arise, Dr Sudeep Ranjan Sarkar from Kolkota for Neti Neti (Not This, Not This), Prashant Vanjani from Delhi for Villari, and Ninad Kulkarni from Pune for Connection Failed.

Ninad Kulkarni, 16, will be the youngest among the directors. His first film, about a farmer's suicide in Maharashtra, was made when he was 12.

A special mention to Pema Dhondup, one of the few accomplished Tibetan filmmakers today. We are happy to be presenting the India premiere of his latest film Arise (Longsho). He will be travelling from California to present his film.

Arise is about the on-going self-immolations in Tibet. Tapey is a young Tibetan-American living in Los Angeles. His family has a history of being martyrs for Tibet’s struggle. In order to save his Tibetan-Muslim friend Yusuf and his girl friend Lhamo from falling into a Chinese government trap that would make the world think Tibetans are turning to terrorism, Tapey chooses the path his father took many years ago: Letting the enemy know that they are wrong.

The Free Spirit Film Festival, begun in 2004, is the oldest ongoing film festival in McLeod Ganj. The festival is aimed at sharing beautiful stories, concerns, interests, and creativity. It is hoped that the festival will inspire and encourage young people by providing them a platform, showing them the diverse opportunities in the filmmaking profession, and to honour and promote those who already are filmmakers.

Considering that McLeod Ganj is a popular destination for tourists from around the world, it lacks enough avenues for events, fairs and festivals such as this festival.