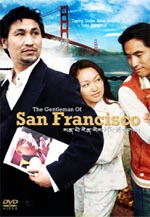 The Gentleman of San Francisco

The Gentleman of San Francisco is a 45-minute-long Tibetan telefilm that highlights numerous issues and misfits of Tibetan society against the backdrop of modern scientific world. It is a story of a Tibetan writer and his interaction with a conservative Tibetan neighbor in San Francisco who perform divination in their lives. The theme of the story is that Tibetans should now stop relying on predictions and divinations. The film is written and directed by Tashi Wangchuk, who earlier co-directed "Richard Gere is My Hero". Tsering Dorjee Bawa, who had worked on several Tibetan films like "The Himalaya", is the lead actor as well as the producer.

About this film:
San Francisco Bay Area Tibetan film, at TibetSun.com
World Premiere of "The Gentleman of San Francisco", at TANC.org 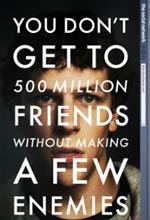 The Social Network follows the building of FaceBook by Mark Zuckerberg, from its start as a project in his dorm room to its rise as a global social network and a revolution in communication. Zuckerberg becomes the youngest billionaire in history, but (naturally) success leads to personal and legal complications.

About this film:
Film home page, at theSocialNetwork-Movie.com
The Social Network, at IMDb.com 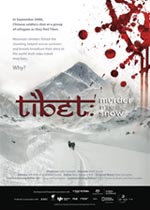 Tibet: Murder in the Snow

Tibet: Murder in the Snow tells of young Tibetans who risk their lives each year to cross the rugged Himalaya Mountains in an attempt to see their spiritual leader, the Dalai Lama, or attend school in India. A teenage Tibetan nun, Kelsang Namtso, was killed when Chinese border police opened fire on a group of pilgrims as they fled Tibet over the infamous Nangpa Pass. The shooting was witnessed by international mountain climbers, some of whom videotaped or photographed the events and also helped rescue survivors and sent the story out to the world. The movie tells the story, using the original climber footage, reenactments and interviews with witnesses and survivors.

About this film:
Film home page, at TibetMurderintheSnow.com
Tibet: Murder in the Snow, at IMDb.com
Original footage of the shootings, at TopdocumentaryFilms.com