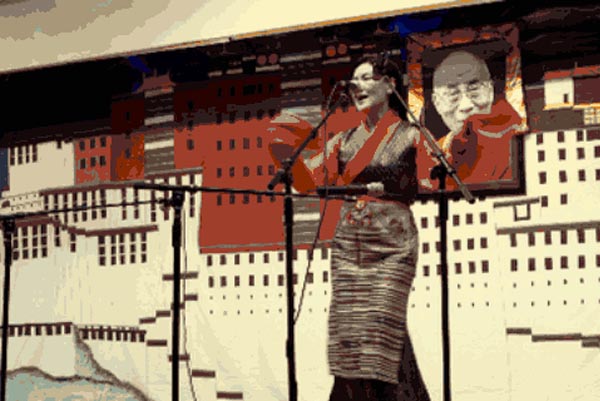 Human rights film sings its way to global success: The Nightingale of Tibet

BEVERLY HILLS, USA, 24 September 2013 The Nightingale of Tibet [working title Drapchi]is India-based independent filmmaker Arvind Iyer’s first film. It tells the inspiring story of Yiga Gyalnang, played by star Tibetan singer Namgyal Lhamo. The film is a chronicle of the singer's journey to the west and her escape from incarceration in occupied Tibet.

Namgyal Lhamo masterfully portrays Yiga Gyalnang, bringing her epic story and inspirational music to life. Lhamo starting singing at the age of 8 and was recognized worldwide as a child prodigy. She trained under the prodigious instructors of Tibetan Opera and Classical Music at the Tibetan Institute of Performing Arts set up by HH the Dalai Lama. Her role as the singer is a perfect fit as the talented vocalist, and her performance delivers an unforgettable message.

"Namgyal Lhamo is the greatest Tibetan singer in the world today and is her great talent that inspired her character of Yiga Gyalnang in the film," said director Arvind Iyer.

"In a larger context, it is a story about Tibet told through a character. The film prompts audiences to think deeply about what is happening in Tibet, and how Tibetans have until now, dealt with it," adds Namgyal.

Amongst those who have viewed the film through private screenings include controversial Chinese artist Ai Weiwei who went on to state about the film, "Drapchi [working title] is a sad and moving film that makes us realize that the plight of the Tibetan people is the plight of humankind."

The Nightingale of Tibet is a heartfelt, spiritual and profound film that has evoked strong emotions from viewers at festivals worldwide. At the 35th Cairo International Film Festival the provocative film, with its working title Drapchi, was screened against the backdrop of an impending political revolution at Tahrir Square, Egype, and was strongly received by audiences.

The movie has since been picked up for worldwide sales by the House of Film's Spiritual Cinema Collection and will make its debut in the US marketplace at the American Film Market to be held in November in Santa Monica, California.

About Director Arvind Iyer and House of Film

Arvind Iyer is an independent filmmaker based in Mumbai, India. The Nightingale of Tibet is his first feature film.

House of Film is a dynamic worldwide sales agency specializing in innovative film acquisitions and marketing. An early Tribeca Film partner and a member of the International Film and Television Alliance, the company is earning a reputation for bringing worthwhile and unique films to the public.