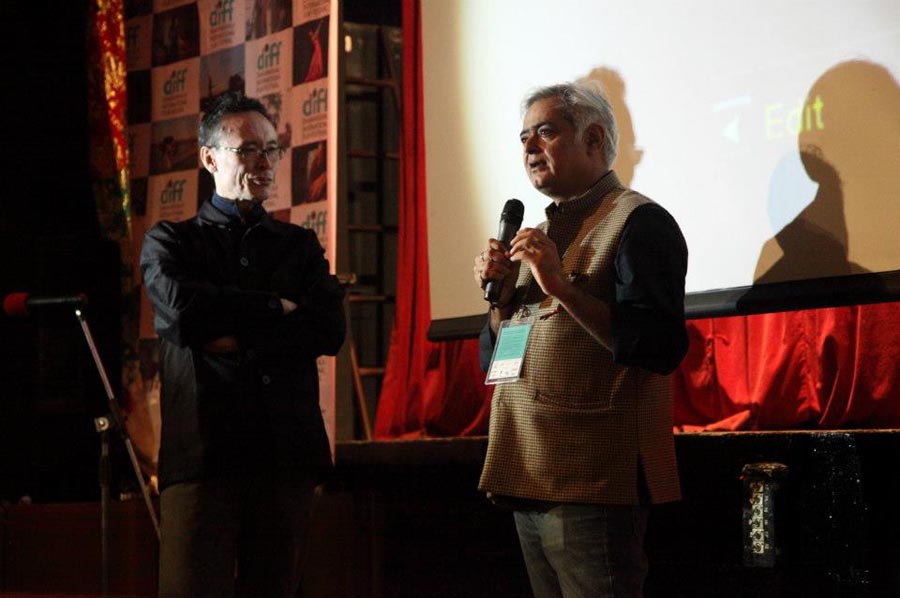 Director of the film Shahid, Hansal Mehta, interacts with the audience after screening his film at the Dharamshala International Film Festival in McLeod Ganj, India, on 1 November 2012, as co-director of the festival Tenzing Sonam looks on.
Photo: Courtesy of DIFF

DHARAMSHALA, India, 1 November 2012 The Dharamshala International Film Festival, the first of its kind in the state, began with a lot of excitement and expectation.

The first day of the fest saw artists' workshops where 12 artists from India and abroad intermingled in an art and cultural interface addressing the issues of identity, culture and politics while promoting inter-cultural exchange.

As filmmakers based in Dharamshala, Ritu Sarin and Tenzing Sonam launched the first edition of the DIFF from November 1 to 4 to bring meaningful cinema to the mountains and promote and promote local film-making talents. The duo have always believed that the town's diverse contour would make it an ideal spot for an international film festival.

Sarin says, "Our aim was to create a contemporary cultural event in Dharamshala which would introduce local communities to world cinema and involve their participation. Apart from sharing our love for cinema, we aim at filling the gap which small towns face culturally in terms of cinema and arts."

With filmmaker Hansel Mehta's Shahid being the opening film, the festival witnessed a blend of local audiences as well as film enthusiasts across India and abroad.

Other films to be shown include Jennifer Fox's My Reincarnation, Mark Elliot's Yangsi, Rajan Khosa's Gattu, Dain Said's Bunohan, and Umesh Kulkarni's Deool, among others.