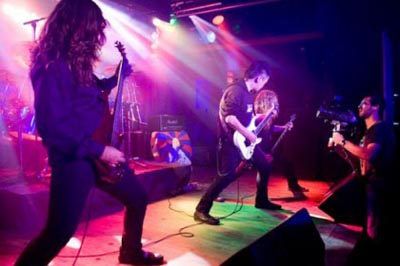 Tibet rock in the film "Journey of a Dream".
Photo: Photographer unknown

ON THE WEB, 21 April 2011 Journey of a Dream is a fantastic exploration of the Tibetan diaspora and the movement to free Tibet from Chinese occupation, all through the eyes of a globetrotting Tibetan heavy metal rocker.

Shenpenn Khymsar, who also helms this documentary, returns to his home of Darjeeling, India, after a decade of pursuing his musical ambitions in North America. He discovers a passionate community of rock musicians that fuse both native Indian and exiled Tibetan sensibilities.

Khymsar parallels the yearning of the Darjeeling rockers to gain international recognition, with the push for mass awareness of the plight of his motherland.

The result is dynamic yet intimate glimpse into both the chronically-misunderstood culture of heavy metal, and the tireless and inspiring Tibetan youth movement, which fights for a land and a culture that has been hijacked for generations. You'll be seduced by the majestic Himalayas, moved and enlightened by the passion for cultural perseverance, and like it or not, you'll even do a little headbanging.