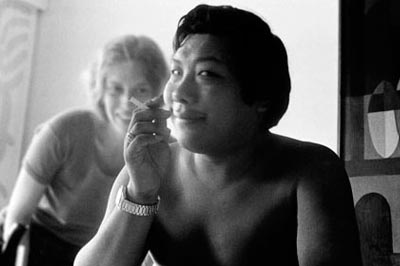 ON THE WEB, 17 February 2011 Johanna Demetrakas' documentary, which screened at the Santa Barbara International Film Festival, follows the global trek of Tibetan lama Chogyam Trungpa and his impact.

Well before American Buddhists and New Age acolytes began flocking to the feet of Tibet's Dalai Lama, hippies and spiritual seekers were following in the footsteps of Chogyam Trungpa, a Tibetan lama who took up residence in the U.S. during the 1970s.

A provocative account of Trungpa's global odyssey, Crazy Wisdom offers a perceptive, if one-sided, perspective on Trungpa's impact on American spirituality and the arts, but is probably too rarified for the uninitiated — film fests, DVD and VOD will provide the best refuge.

Born in Tibet in 1939, Trungpa was identified as a reincarnate lama (“rinpoche”) before he was two years old, and completed ecclesiastical studies within the Kagyu branch of Tibetan Buddhism, before escaping his homeland in 1959 and resettling in India following China's invasion of Tibet. A move to London to study at Oxford University eventually led him to Scotland to co-found the first Tibetan Buddhist center in the West and the decision to give up his monastic robes to become a lay teacher and marry Diana Pybus, a 16-year-old follower.

In 1970, Trungpa and Pybus moved to the U.S., where they settled rather incongruously in Vermont, establishing a rural meditation center. Trungpa began teaching a growing following of lay meditation practitioners, many of them counter-culture refugees seeking spiritual inspiration, and expanding his interest in the arts. Wherever he traveled around North America, however — eventually settling for a time in Boulder, Colo., where he founded the renowned Naropa University — Trungpa provoked controversy and intense curiosity, as well as devotion.

He freely slept with other women besides Pybus — many of them his students — and smoked and drank openly. Trungpa's spiritual methods were often as divisive as his lifestyle, prompting followers to identify him as an embodiment of “crazy wisdom,” a traditional teaching style involving unconventional ideas and practices that shock students into new realizations of Buddhist principles.

Whether a lifestyle or a religious choice, Trungpa's excesses led to his death in 1987 from cirrhosis of the liver at age 48, after he had established a Tibetan Buddhist monastery, a network of Shambala meditation centers and published dozens of English-language books on Buddhism.

As a former acquaintance of Trungpa, veteran documentary director and editor Johanna Demetrakas presents a fairly straightforward, chronological account of Trungpa's life and teachings, employing historical photos, archival footage and contemporary interviews with relatives, friends and followers. Aside from some mild criticism of Trungpa's practices from American Buddhist scholar Robert Thurman, the doc is overwhelmingly hagiographic, extolling the lama's legacy as teacher and spiritual guide, despite the debate that surrounds his methods even today.